“VII: The Empire Strikes Back ” 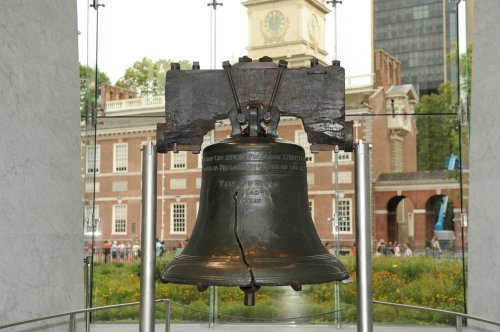 8/5/17 (Day 270)- In Philly for a few days (which makes me 3/3 for showing up to cities and seeing a damn Trump tower) and of course when in Rome you do the whole touristy thing.  Philadelphia is not much unlike Boston in that they really play up the Colonial days.  Perhaps even more so, because it’s freedom this, freedom that, I mean slavery was legal here but on the low tho we rode for the cause.  I’m surprised they haven’t renamed the city Freedomdelphia.   Then reality sets in.  You  look at the actual Declaration of Independence and remember that you wasn’t “all men”, the Constitution applies to you, until it doesn’t.  Freedomdelphians come from all over the country to see documents and symbols that aren’t for you.  Humbling.  This is America through white gaze, a scrappy little country that could and ultimately did.  While to me, it’s more like the fuckboy who got his act together slightly enough for the next one but still has plenty of the same old bad habits.  You try to explain that America still ain’t change but they  lalalalalala can’t hear you over all of this freedom, why you so bitter?


8/8/17 (Day 273)- So on today’s episode of The Apprentice, Toupee Fiasco just threatened North Korea.   Like, we need an adult yo.  It’s not that I have any doubt they if it came down to it, America can give North Korea the fade but at what cost? Lives? Nukes? Reelection? 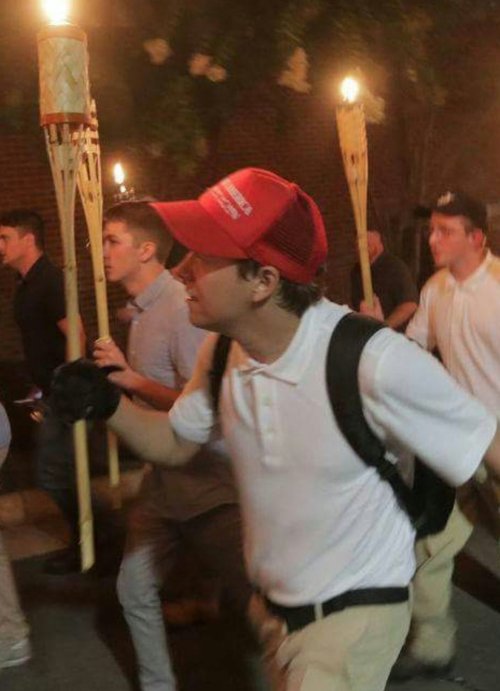 8/12/17 (Day 277)- So remember how last week I said Freedomdelphia was how doe eyed white people see America? Charlottesville is the other side of that.  White people who claim they too are oppressed; because by capitalism. Oh never mind they are marching to save a Confederate statue.  With Tiki torches. And Nazi salutes. And anti semetic chants. It’s the opposite end of the spectrum,  Freedomdelphians are so privileged they view every increment of progress as resolved, Tiki Torchers are so privileged they view every increment of progress as oppression.  The irony is we aren’t even close to equality, we at eo still building the q.  How are we already at Klan rallies, we couldn’t get to equa first?  Why are these new Nazis so pressed? Outside of losing your job for saying the #inward or wearing blackface, the world is your fucking oyster.

8/13/17 (Day 278)- Cantaloupe Caillou has called out Obama, Hillary, war heroes, mayor of London, CNN, Morning Joe, Colin Kaepernick, Washington Post, the NY Times, Hamilton: The Musical, Mac Miller, The Terminator, North Korea, Venezuela, Jeff Sessions, James Comey, Nordstrom, Django Unchained,  NBC, China, Mexico, Judges, Congress…. But when it’s white supremacists literally marching in his name suddenly he’s vague.  Where’s the sound and fury?  It makes me think about all the times Obama would give a platitude and people would get frustrated because he wouldn’t say how he really felt because he was the black President but not the BLACK President.  Now I see Toupee Fiasco unwilling to condemn Nazis who ran down a protester.  Even as there’s a clear and obvious side to take, #their man’s takes  “many”.  White privilege displayed at the highest level of government. So again, why exactly are they mad?

8/15/17 (Day 280)-  So a day after offering a condemnation of racists that was on par with Martin Payne’s first marriage proposal…he doubles back and again blames both sides.  The fuck is an “alt-left” there’s Nazis and people who say fuck Nazis. This isn’t a debate like drums or flats.  At least now, the bluff has been called.  Twitler has aligned himself with white supremacists, and any and every one who supports him supports that. Reagan had the courtesy to dog whistle, to give himself and his supporters an “I’m not racist, but…” shield to hide behind.  The Tangerine Tyrant and his Tiki Torch troupe are out and shameless about theirs, and now the safety pin wearers are forced to come out and pretend they were duped like they didn’t know this is what this always was.  Far as I’m concerned the red hat and the MAGA sign are swastikas now and society should treat it accordingly. 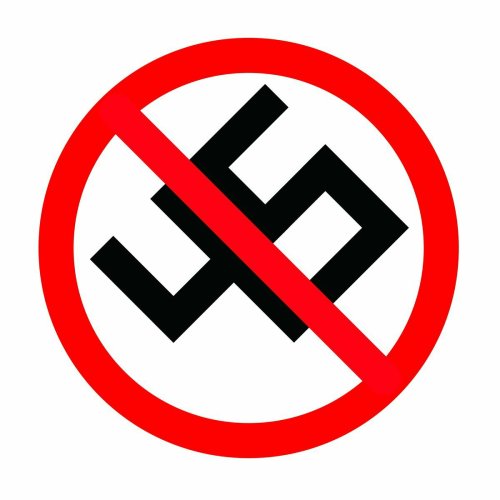 8/17/17 (Day 282)- White people still showing their ass about these Confederate statues like we don’t still got slave owners on the money.  Doth protests too much. Suddenly it’s about preserving history, because not revering Confederate generals is the same as if they were taken against their will and had their lives erased.  Removing Confederate statues isn’t erasing history, we will never forget the fact that white people went to war against their own military because they couldn’t own other human beings anymore. That is a fact.  These statues were erected during Jim Crow not as a reverence for American history but a tribute to whiteness.  Trump is from New York telling a crowd in Arizona that he will protect their “culture”, y’all ain’t even go there.  Clearly this isn’t about Southern pride. Ain’t y’all “the party of Lincoln” (when it’s convenient to say)  anyway?, So is it Oochie Wally or is it One Mic.

(so you know how on House of Cards, Frank realizes that the power isn’t in the Presidency but it’s in the shadows with access to the Presidency.  That’s pretty much how I view this Steve Bannon firesignation. He ain’t really going anywhere he’s just hot right now.  Maybe he can go cure that Greyscale while he’s gone)

8/20/17 (Day 285)- The President’s a hack, my student loans due is this World War 3 or Civil War 2…the former. This week. While racial tensions at home remain thicker than Serena, which has made us all forget that Sesame Tweet threatened North Korea 2 weeks ago and then China responded with a “bitch, try it”; Dolt45 comes out to announce he plans to send more troops to Afghanistan because… reasons. It’s pointless to bring up that spent the past 5 years calling for the withdrawal of troops but for the last 5 years he was just the dude from the Apprentice.  Apparently, he’s already live tweeted his entire presidency*.  He’s the Three Eyed Racist.

8/22/17 (Day 287)-  According to an ABC/WaPo poll, 10% of Americans support the alt right (Nazi) movement.  That’s 16.4 million people, about 25% of Trump voters. (as far as I’m concerned 4 out of 4 of them are).  Then there’s the people with “no opinion” (Freedomdelphians) who if you’re not against you might as well be with, silence is violence B.  This is what happens when people feel emboldened by their Klansman-in-Chief. 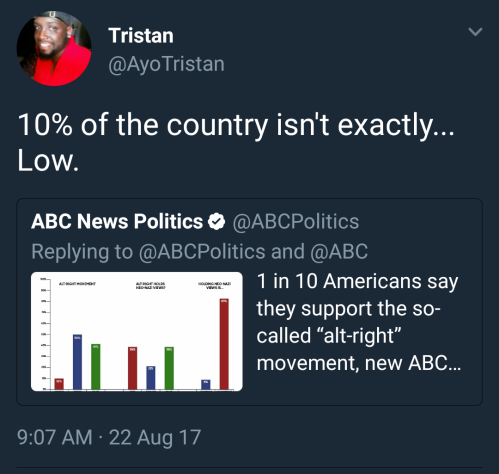 8/25/17 (Day 290)- Sheriff Joe Arpaio terrorized the Latino community.  Racial profiling, concentration camps, shackled a woman and forced her to give birth, refused to investigate sex crimes committed against immigrants, refused to feed or treat prisoners many of whom he rounded up for existing while brown.  In November, Hillary called out Trump for even supporting him. And today Orange Foolius pardoned him, because he “kept Arizona safe”.  Even after Charlottesville, the Hate Pumpkin isn’t even lowkey anymore.  Then again, why would one expect him to be, he said he was going to build a wall to keep the Mexicans out and now we here. 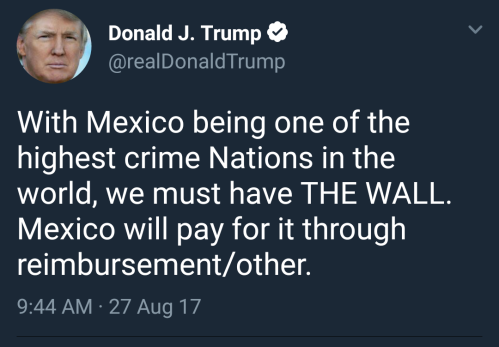 8/27/17 (Day 292)- …and speaking of that damn wall, will that be cash, credit, or government shutdown? According to 2peé Shakur, Mexico will reimburse which is basically saying the check is in the mail. The cynic in me almost wants the wall as a testament to how divided and hateful this country truly is. Then you see Houston underwater and remember that Conman Twitty slashed the coast guards budget to try and pay for the wall.  You remember that behind every stupid tweet, blatant lie, poor decision, empty threat… Real lives are at stake.   When disaster strikes you need a real leader not the jackass who posts memes and tries to look at the sun.

8/29/17 (Day 294)- The President and First Lady arrive in Texas, oh wait it’s just Pumpkin Spice Putin and his escort.   Now I’m not going to politicize a natural disaster who would do something so crass.  Trump supporters, of course.

8/31/17 (Day 296)- Why are we still here? Honestly.  Approval ratings in the toilet, CEOs from tech, labor, entertainment, sports are all running for the hills, every week someone getting fired, Mueller is still working on his investigation, North Korea still wants the fade, can’t afford the wall, couldn’t repeal Obamacare, Muslim ban flopped, and now Nazis trying to party like it’s 1939.  Everyone knows he collided with Russia it’s about the worst kept secret since Cersei/Jamie’s incest affair.  Seriously, whatever this…Presidency as been, failed.  So, why are we still here?  If/when DonaLLLLLd falls, will anyone make a sound.  75% of his supporters only love him in private like an ugly girlfriend.  Or so we’re led to believe.  Condemning Trump in public does nothing for me, that happened all election cycle and ultimately it was 306-232.