[Editors Note: So by popular demand, I decided to keep the Trumpocalypse train rolling.  First Monday of the month, every month, until I go insane or he gets impeached.  Then regularly scheduled programming every week.  K. Thanks. Bye.]

The Trumpocalypse: Part I, Part II 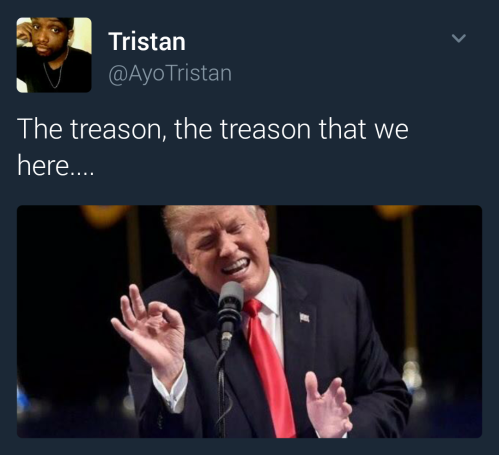 2/5/17 (Day 89)- Sports has long been the escape for many, including myself.  So Super Bowl Sunday, I just want to drink beer, eat way too many wings and watch my favorite team play.  In what can only be strange irony, it was my Patriots against the Atlanta Falcons.  Toupee Fiasco citing his friendships with the coach, QB and owner adopted the Patriots as his own (even though he don’t even go here) and I find myself being on the wrong side of this two Americas bowl.  It was like being the one person who cared about justice after the OJ verdict, or preferring turkey bacon, sugar grits and thinking Thriller was Michael’s best album.  As much as we argue against being a monolith, no one likes being against the tribe.  But there I was rooting for the official team of #MAGA.  Then more I sat with it, I came to the realization I wasn’t about to let the Supercallousmisogynisticracistnazipotus run me off my team, he, Brady, Belichick will all be gone within the next 4 years anyway.  And Georgia is a red state. 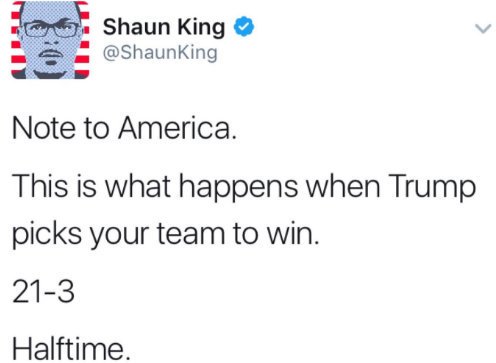 2/12/17 (Day 96)- So I’m in Chicago, some business and some R&R, as my luck would have it my hotel would be right across the street from a Trump Tower.  I remember every day walking out and seeing this obnoxiously large building, shaking my head and going on about my day.  But today was different.  There was a crowd outside the tower.  I check my phone for any news…Cantaloupe Caillou has been actually pretty silent, still licking his wounds from the L he caught from the courts.  This was a scheduled protest, largely white, they are just going to moon the tower because Trump can kiss their ass.  It’s a lively crowd, but I see this just some white people shit I carry on with my day.  But it highlighted what my issue has been with Dwight P Poe lately…They think this shit is funny still.  While late night hosts thank the lucky stars for the material (sup Colbert), this is still real life.  Trump threatened to send the national guard to Chicago, and I’m certain he wasn’t referring to the River North where we were.  Mooning a building isn’t doing anything and they know it. Yet there they was, “fighting” the power.


2/15/17 (Day 99)- It appears the news have now come around on the Trump clearly conspired with Russia thing.  The Russian connection has been a conflict for me, because yes fanning this flame will probably help get Edward Littlehands out of here but it also gives a pass to the white supremacy that got him elected in the first place.  The news can pretend #DemEmails are the reason Trump won, but I know better.  Meanwhile VP Mike Pence is demanding answers and keeping his nose clean so when the storm clouds come they’ll let him stay.  Race Bannon can’t be trusted. 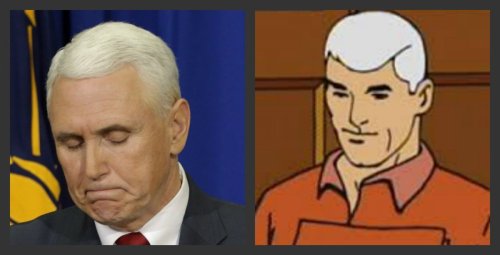 2/20/17 (Day 104)- This President’s Day, because I’m a strong, independent citizen who don’t need no President,  I would like to take this time to recognize an actual great leader of our nation,  Happy Birthday Rihanna.

2/23/17 (Day 107)- The newly minted Attorney General, Jefferson Beauregard Sessions whose name just SOUNDS like slavery, is wasting no time living up to his name by rolling back President Obama’s private prison regulations.   This means more drug prosecutions, longer sentences, set your clocks back to 1983.  This isn’t even politically motivated, both Democrats and Republicans both want to cut the prison population, and Sessions just incentivized as many heads in beds as possible.  Obama vowed to make fighting mass incarceration his post Presidential legacy and this was a direct attack.  Is this going to bring him back?

2/28/17 (Day 112)- Cuuuupid….doesn’t liiiiie. (White readers y’all can google what I did there later).  So HBCU Presidents from all over the country went to meet with Mango Mousellini, because if there’s a chance to get some bread they going to take it, they grinders.  I got why they went, although I can’t help but look at them sideways because it’s like, have you seen him?  Historically speaking, HBCUs have always fared better under Republican presidents because they are all about keeping *us* away from *them*.  Trump signed an executive order, moving their objectives from the desk of the Betsy DeVos, who for reasons unknown to anyone decided to connect HBCUs to her “school choice” agenda,  onto his own, with no actual promise of funding.  Basically, they got played B.  They were better off scheduling their football team to get beat by 70 by Alabama, at least that’s a guaranteed check.
3/1/17 (Day 113)- So I watched the Joint Session address last night, or as I would call it #HateofTheUnion, and I was a little taken aback how comfortable he looked.  I simply forgot what these speeches are, board meetings.  Trump was in his element, he can spew off his alternative facts to large waves of applause.  People appear to be largely impressed, but that’s white mediocrity for you.  All he needed was an actual fitting suit and a teleprompter and suddenly people were ready to lay down their arms and accept the Great Pumpkin as their Commander-in-Chief. (Looking at you, Van Jones).  It goes to show, they don’t disagree with his policies, they just wish he’d stop being embarrassing.

3/4/17 (Day 114)- So remember how last week I mentioned how Jeff Sessions, the guy who was officially declared too racist to be a federal judge 30 years ago but managed to become the Attorney General and within days rolled back regulations to make private prisons great again?  Yeah…never mind all of that, HE TALKED TO RUSSIA AND LIED ABOUT IT *gasp*.  Once again, white people worried bout the wrong thing but if this is what it takes to get him out of here, so be it.  Meanwhile, Toupee Fiasco is throwing smoke bombs on Twitter, claiming Obama had his phones tapped and Arnold Schwarzenegger isn’t quitting the Apprentice he’s being fired.  Race Bannon still chilling waiting for all this to fall so he can swoop in like a work husband.  Don’t trust Race Bannon.

5 responses to “Today’s Word is… TOUPEE”