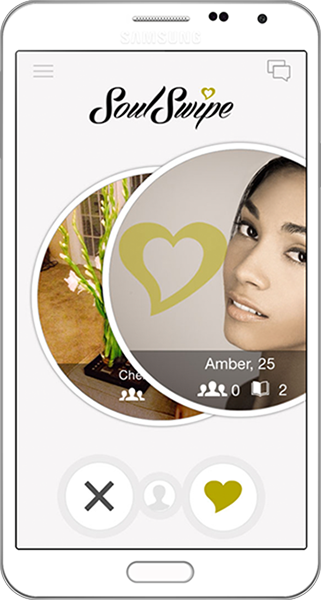 As someone who spends a lot of time online, I’m not a big fan of online dating. I enjoy the randomness of life; I like the idea that I may meet the love of my life at Target, stealing a glance on the subway, at some function neither of us were super enthused to be at in the first place.  I guess you can call it fate or whathaveyou, but there’s a bit of that lost when you are swiping through profiles getting a bae made to order.  I could be like I want curls, goals, thick, wit, demure, secure…YOU NAAAAME IT whilst swiping left on all that doesn’t apply, but who knows if I met any of them in a different circumstance I wouldn’t be interested.  What gets lost in swiping is you get caught up in next, next, next you don’t even realize what you’re passing on.

There’s a deliberateness to online dating that I can’t rock with.  People wield the power of the swipe and go against their own self interests.  Most people don’t know what they want.  It’s not much unlike your career, yes there are people who knew they wanted to be a doctor since they was 5, but most people find what they are good at, finds somewhere that will pay them well to do that and go from there.   Online dating sites would lead to believe everyone on there is really trying to find someone special but in my experience it appears to be anything but.

Yes, experience…I actually decided to give online dating a shot, for the culture. I tried two sites, OKCupid because the stats nerd in me was curious about who would match well with me and Black Tinder aka SoulSwipe, because I just find the name funny.  (Also my OKC inbox was looking like Make America Great Again, more on that later).  I did a few weeks on each, kept an open mind about it, had a handful of dates but ultimately…I’m as single as when I joined.

So, SoulSwipe.  Soulswipe is pretty straightforward, name, age, height, short bio and some facebook pics.  Swipe right for yes, left for no, if you match then you can message, iight bet.  (I also just learned that once you swipe left they are gone forever, like, what if it was an accident…maybe she didnt realize how much worse it’d get, that feels unfair…there aint even a maybe pile…that’s some ol bullshit)  Besides that, my biggest takeaway….do you even want to be on here?  Some profiles read more like a rider list than an introduction. “If you just say hi, I’ll just ignore”, “don’t ask me about my day”, like every time a dude slipped up it was a new rule on the page, the online equivalent of putting heads on the stake.  I can recognize the privilege at play, I don’t know that life of countless people in my inbox and it’s like, you didn’t even pretend to read my page or all you said was hi and they asking for pictures. However, if you’re on a dating site hoping to meet new people, you kinda have to be, you know, open to meeting new people.  You swiped right too, ma.  The people I connected with were open and able to laugh at themselves, while others…didn’t get my humor.  Which is the ultimate dealbreaker if there ever was one. I’m hilarious. 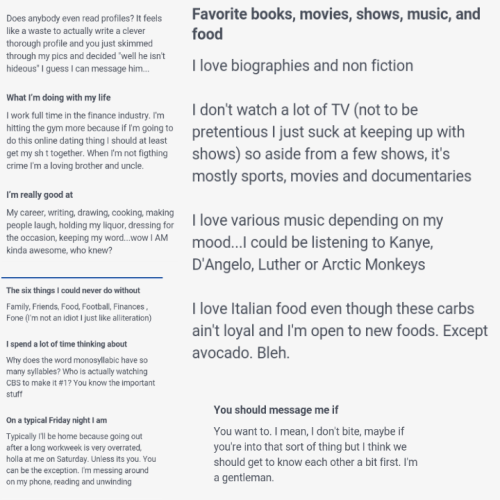 So on to OKC.  I made a full profile, a couple pictures but I mainly focused on the questions for a solid sample size. The matching system seemed accurate enough, but I tend to have good chemistry with everybody, I know a little bit of everything. My overwhelming result was a lot of white women, devout Christians, and homebodies. Apparently, the line about avocados was an icebreaker on a silver platter or I’m actually Donald Glover.  Church girls, well, we know what happened last time, and homebodies…that may have been the biggest takeaway.  I went out with 2 women who were pretty chill and realized how much I don’t necessarily want someone like me. I need someone who pushes me out my comfort zone, gives me balance. The people I actually connected best with were in the 70% range, have some things in common but plenty of differences to bicker about, they are the type who would be out anyway without me, the type who would be a friend of a friend, who I would run into at a happy hour, hell, even meet on Twitter.  There can’t be two me’s in a relationship.

By the end of my experiment I got, 2 books and a possible. (I learned how to play Spades from someone I met offline, score 1 for the real world). Of course, plenty of people have found love online.  Some more deliberate, like on a dating site, others more casual and started with a DM.  They say you always find what you’re looking for when you aren’t so doesn’t that fly in the face of dating sites anyway? I’m not knocking it, I just recognize it’s not really for me.  (Well unless I ever get around to making that dating app, then online dating is the way to go, don’t nobody be going to bars anymore, get with the times).  I guess I’m still good with flying blind and not really forcing my hand yet. Perhaps one day I’ll see if my Match and I find some e-harmony over where Black people meet or where Christians mingle. I’m sure there’s plenty of fish in the sea.

4 responses to “Today’s Word is… ONLINE”