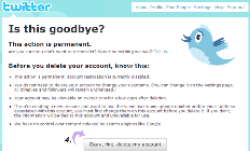 One of my first barbershops I went to was this half barbershop/half salon up the street.  It started off strictly two separate establishments as dudes with braids & sistas with fades grew more trendy the masses joined together and not long after a Battle of the Sexes was waged.  Initially, I was “young blood” being talked through, not to, by men and women alike trying to win their respective debates under the guise of giving me some game.  As I got older I partook in some of the dialogues but eventually, I just wanted to get my “regular, 1 1/2, skinny chinstrap, leave the goatee” and go about my business. So, I found a new barbershop.  It got exhausting debating hypoghettocals like “So you wouldn’t smash your cousins ex if you only met her one time before at a party and she don’t recognize you now” with a bunch of people whose opinions on the matter don’t actually mean anything.  (Also my regular barber got locked up Free “Dread” Bwop Bwop *air horns*).    That’s how I feel about Twitter or “Black Twitter” as the media outlets like to call it sometimes; it just gets….exhausting.

Now if you follow me on there, you know I’m fairly active on Twitter.  At its best, Twitter is great at getting and reacting to news in real time or consuming media.  Whether its the Superbowl, Apple Press Conference, a State of the Union address, Twitter is the go to for context, opinion, and them jokes (and of course trolls but they get half a bar…..y’all know the rest).  Then there’s times when there isn’t really any news, no game is on, no TV show with a cult following on; its a Tuesday morning and people are at work? more or less getting their barbershop on with outlandish opinions, with mentions and RTs providing credence to the nonsense.  It feels like I’m back at the old barbershop. Everything is a battle.

I’m in my mid 20s, corporate job, Gemini, no kids, under 6′, attended a PWI, have a Samsung phone, PS4, Boston sports fan, indifferent on the weight and hair choice of dating partners, somewhat traditionalist, lean liberal, and I like Turkey Bacon.  That right there is about 35 twitter debates, except I don’t feel the need to turn every aspect of my life into a societal debate.  It’s not so much that I think celeb X is attractive, everyone must or else prepare for battle.  If a 21 year old wants to think her husband must make 100K, why must the league of 30something Twitter rain judgement upon her and tell her she can’t because they didn’t?  Why can’t a song be a song or a movie a movie without someone putting their own agenda into it?  We do we even care when it has no actual bearing on our feelings, our lives.  I remember the barbershop wars would get so heated, you would think these were couples arguing and not strangers and acquaintances that wasn’t checking for each other anyway.  So why even invest the energy? Who cares?

We care. We all do.  It’s a natural urge to defend when one feels attacked, even if the attacker is a sassy stranger getting a roll n set or just some miscellaneous person on Twitter.  Over time, that urge wanes when you realize ultimately that person doesn’t matter.  “Don’t feed the trolls” “Its Just Twitter” “I Know Somebody Like It” much easier said than done when confronted with some fuggery.  I’ve gotten better with just rolling my eyes and keeping it moving but on a good day, I will go off.  But you know I’m being better in 2015, channel your inner Kanye n whatnot.  I stopped going to the barbershop, I could just as easily delete Twitter……

….nah.  Its too connected to my TV watching (cuz some shows are just unwatchable without live tweeting) but I will make it a point to take some breaks when I’m fourfiveseconds from wyling because some people, well, I just wonder who raised them