[Editors Note: An oldie but goodie…] 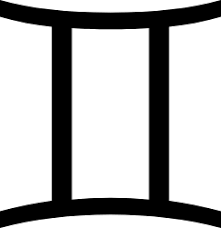 <line so cheesy I won’t play myself by posting>

“That would’ve been my second guess”

Now who she attracting with that line whats your name, whats your sign? I played along though, she was cute and I love bold women who approach so I don’t have to.  In reality I’m not into astrology, well most men aren’t, it’s a convenient icebreaker but any dude that interrupts your Sudoku to check his horoscope deserves the sidest of eyes.  Admittedly I’m slightly amused by astrology,  I will rep team gemini just like I repped classes of 2006 and 2010, team android and team darkskinned. Some horoscopes even hit the nail on the head, but even a dead clock is right twice a day.  As far as dating goes, in my experience Geminis are pretty much hit and miss, everyone seems to have a few Geminis they can’t stand.  They also have some good qualities that I will use at my own convenience, mostly tongue in cheek mocking those who read way too much into it.  Not knocking ones beliefs but I hate being generalized; stop being lazy and googling Gemini horoscopes and get to know me, the actual person who happens to be born in mid-June. 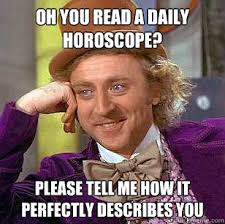 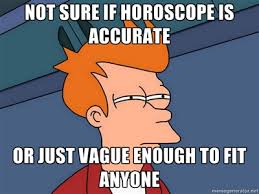 The main reason I don’t care for astrology is it seems every sign is sooooo great.  Most horoscopes are sugarcoating and pandering, the worst horoscope I ever read might have been: someone you know is having a bad day, avoid them.  Social media has taken the annoyance to another level with accounts who do nothing but spit out meaningless positive generalizations about a sign so people can say omg thats so me…yeah you and 56897394 other Tauruses, have a seat.  It’s almost like the evil queen’s magic mirror, tell me how sweet I am, tell me general things that no one else understands about me, tell me she’s not just being a b*tch the stars are aligned that way.

Relationship astrology is perhaps the worst of all.  From the exes birthdays I cared to or was easy enough remember, I dated mainly Libras, a couple Sagittariuses, two Scorpios and a partridge in a pear tree.

Gemini and Libra have an easy rapport since they’re genuinely curious about other people. Libra loves to entertain, and Gemini is a people person, too. This sets them up to be great hosts, a couple that has lots of “couple friends.” At home, they’ll share the minutia of their lives, observations, jokes, analysis and brilliant inspiration

Wrong.  I’m far from a people person.  Most of the time I had “couple friends” was with a Capricorn and a Scorpio.

When Gemini and Sagittarius come together in a love affair, it can be a truly spectacular match! These two are extremely compatible; any rough spots they encounter during the course of the relationship are sure to be smoothed over with a minimum of effort. Gemini and Sagittarius are great friends, besides being well-matched lovers.

Gemini and Scorpio share an endless curiosity about human behavior, which gives them a lot to talk about.  Scorpio will try to read Gemini at a deep level, while the nature of the Twins is to constantly change.  Gemini feels just as deeply as Scorpio, though they might dance around it, or fill the space with chatter as a defense.

There’s so much more to astrology that taking billions of people and putting them in 12 categories so perhaps I’m woefully ignorant on the subject.  However, I still can’t take it seriously, you need more people.  I’m much more complexed than a birthday, no star alignment can figure me out.  I’m a product of my mother’s compassion and my father’s determination. I get annoyed easily but I just as quickly let things go.  I’m a hopeless romantic but have too much pride to show it to just anyone. And that’s barely the surface.  A “Gemini” is not enough to describe me. Oh and Scorpios aren’t as freaky as they like to take credit for. But you’ll never read that in the paper.